Over the years students have been involved in a range of action projects to promote marine conservation, from writing letters to their local authorities and Members of Parliament, presentations in front of assembly and public events, investigating where marine protected areas would go, supporting marine reserve proposal groups and addressing local issues in their community such as sand dune erosion.

The action component of the EMR programme is an essential factor in the students learning process and one which helps us to assess the effectiveness of the programme at meeting the projected learning and conservation outcomes. By encouraging students to undertake action, which is based on their own experience, EMR aims to empower students and encourage support for marine conservation.

Students become kaitiaki of the sea and together they make a difference!

Created some great action projects over the years. Here is a video produced by Ryan Torckler and Trace Savage. It was a standout project which has made a brilliant job of introducing a proposal to the community for the Mokihinau Islands situated in the Hauraki Gulf off the coast of Warkworth noth of Auckland.

Back in 2013,  for an EMR action project Riley Hathaway created a video clip about seaturtles and interviewed Dan Godoy. This project was the catalyst for  Young Ocean Exploreers !

Hurupaki School - They participated in 2018, every student created great marine awarness projects, from and informative videos to games and picture books (103 of them!) Check out Addisons marine reserve virtual tour

In Coromandel, Whenuakite student Chloe Burn organised a information evening about marine reserves and reducing plastic and raisied $2500 for the EMR locally, so another local  school could also have the same experience, with approximately 50 guests. A great article was published about Chloe in a magazine read the article here 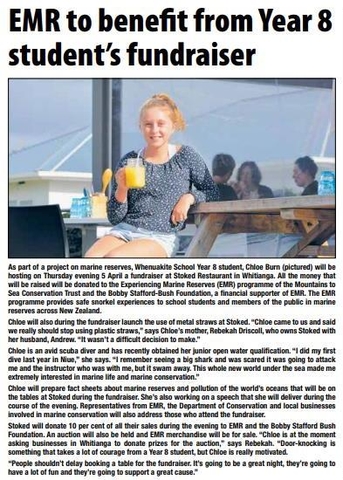 The article above was from the Mercury Bay Informer on the 28th March 2018.

Dargaville Intermediate
Dargaville Intermediate’s action projects included raising funds for the critically endangered Maui’s dolphin (only 55 remain), with Dargaville’s west coast being the Northern most habitat range. Some of the other projects included swimathons, selling baking at markets, or busking to fundraise for sea turtle, whio (blue duck), sperm whale & shark conservation projects. Some focused on marine pollution & beach clean ups, while others looked into local issues such as vehicles on dunes and signs to help protect birds such as the New Zealand Dotterel. Drain stencilling was also conducted within the school grounds. Overall the students raised almost $2000.00 for the various conservation projects which will result in donations to organisations involved in Maui dolphin conservation and to Dan Godoy's turtle conservation research as part of his PhD with Massey University.

Waiheke and Great Barrier Island Schools
Waiheke and Great Barrier Island schools surveyed shellfish numbers and sizes on their local beaches. Gathering real, relevant data to assess the health of their marine environment has proven to be a practical and fun way for students to further develop their knowledge and understanding. Each site was surveyed and transect lines were mapped using aerial photos and GPS technology to ensure the same sites were sampled each year. Follow up classroom work was based around statistics, with teachers appreciating the ability to use real data that students have collected to create graphs and tables.

Opua School
Opua School used music, drama and technology to perform their marine reserve skit & waiata to the Minister of Conservation and other dignitaries at the opening of the Whangarei Harbour marine reserve, as well as in front of their parents during a public community evening.

Russell Primary
Russell Primary produced some amazing work including surveys of marine reserve opinions of their fellow school mates, 3D artwork and cool poems. Their work was on display at the local information centre, so it could be seen by a wider audience.

Orakei School
Orakei School set up a display about the value of marine reserves and presented their powerpoint at the local shopping mall.