To celebrate World Ocean Day on Sunday the 8th June and as part of an Experiencing Marine Reserves (EMR) action project, Campbell Mosely of Whananaki School organised a ‘cutting kerbside clean up’.

Whananaki School had been participating in the EMR programme, supported by the Department of Conservation, earlier in the year which involved an investigation into marine biodiversity in the classroom, learning to snorkel in the pool, a snorkel at the local unprotected beach at Otamure, followed by an inspirational snorkel at the Poor Knights Marine Reserve.

The aim of the EMR programme was to help increase awareness of local marine reserves and their rules. “We are so lucky to have the Poor Knights on our door step, it’s the ultimate wet library educational resources and experiencing it first hand is a great way for the community to appreciate how special it is” said EMR programme director and Whananaki resident Samara Nicholas

As part of the programme EMR encourages action projects to address local issues, Campbell Mosely (year 5) choose to clean up the local area known as the ‘cutting’ at the beginning of the Whananaki Catchment.

“Some people dump or chuck their bottles and rubbish out on the cutting; these will eventually make it to the waterways, which then flow down to the Whananaki estuary and out to sea” said Campbell Mosely.

“I was really surprised at just how much rubbish there was. We had a lot of fun and got loads and loads of rubbish” said Campbell Mosely.

The rubbish seen along the cutting is preventable and the long term plan is to help change this behaviour. What we do on land, also affects our oceans.

The clean-up was a massive community effort, with support from many locals making the activity safe and successful, including support from the Whananaki volunteer fire force members. 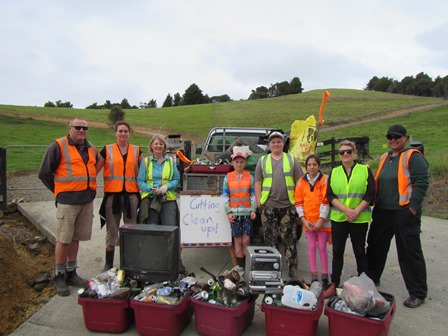 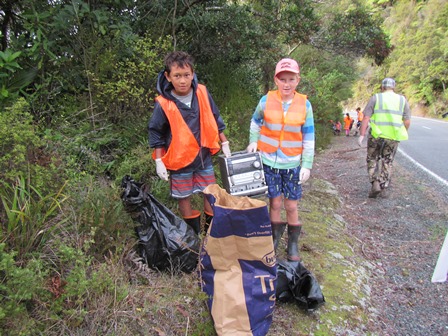 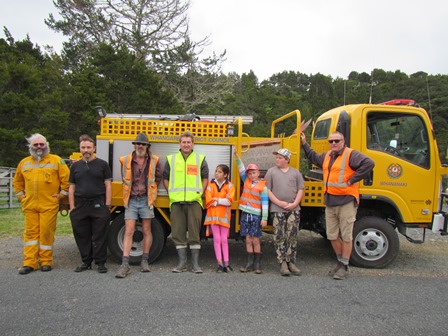