From 1990 to 2004, more than one thousand Kamo High School (KHS) Year 13 geography students worked on the Whangarei Harbour Marine Reserve Proposal. It is believed to be the first no-take marine reserve application by a school in the world.

Many of the hundreds of students that were involved through KHS worked hard to raise money to support the application. Funds came from school mufti days, ACI Glass NZ Ltd, Northland Port Corporation and Refining NZ (then Marsden Point Oil Refinery). The students consulted with a large number of organisations, the public, Tangata Whenua and worked hard to gather information to improve their proposal, seeking expert advice from the likes of the late Dr Bill Ballantine and author the late Wade Doak.

Motukaroro (Aubrey or Passage Island), near the mouth of the harbour, was one of the three marine reserves originally proposed by the geography class. The sheer abundance of life existing in the waters around the island makes it a very impressive zone: species at Motukaroro range from colourful anemones to sponges, bright blue maomao, unusual Spanish lobster and giant kingfish.

The late Dr Bill Ballantine was engaged in fieldwork teaching in the Whangarei Harbour with Auckland University students. He welcomed the efforts of KHS to promote marine reserves in the harbour and strongly supported their application. Dr Ballantine regarded Motukaroro’s southern shore as the best example of zonation seen on an accessible rocky shore anywhere in the world. He considered the case made by Kamo High School for a marine reserve, not only scientifically valid, but extremely important for education and conservation. Areas like Motukaroro are necessarily small - being confined to the mouths of harbours - and warrant a high level of protection. No such areas are currently represented in marine reserves in northern New Zealand (the Gut in Fiordland has a completely different fauna).

Veteran diver and author the late Wade Doak first introduced KHS students to the ‘wet library’ concept that underpinned the project. At school, libraries and playing fields are seen as essential amenities that we must have. Likewise, every New Zealander and school should have access to a ‘wet library’, or marine reserve.

Motukaroro (Aubrey or Passage Island), near the mouth of the harbour, was one of the three marine reserves originally proposed by the seventh form geography class. The sheer abundance of life existing in the waters around the island makes it a very impressive zone: species at Motukaroro range from colourful anemones to sponges, bright blue maomao, unusual Spanish lobster and giant kingfish. The strong tidal influence allows a community of a variety of sessile filter-feeding species to develop, which in their turn attract organisms that are more mobile. The year 13 geography students visited Motukaroro every year to experience the underwater life they were trying to protect. On one occasion, a pipefish in the weed, and later a seahorse, were discovered by students. The massive orca has also been known to visit this island, reflecting the harbour’s title ‘Whangarei-te-rerenga-parāoa’ (meeting place of the whales). Wade Doak has dived at Motukaroro and found the underwater world in some ways more densely populated than the Poor Knights Islands.

Of the two further areas proposed for reserve status, the first is a population of highly productive mangroves at Waikaraka. This highly productive marine zone provides an important habitat for many species. Local conservationist Des Ogle regards the mangroves at least as highly as the Kauri and Pohutukawa. Mangroves provide shelter and food to many marine organisms, and also play an important part in stabilising banks and trapping silt run off from land. The final area proposed was Motumatakohe (or Limestone Island), near Onerahi, which is a mudflat area and home to many endangered shore birds.

On March 15 2002, a formal marine reserve application was made to the Director-General of Conservation. The main goals of the proposal were to preserve marine biodiversity, increase public awareness, and create a ‘wet library’ for both study and recreational enjoyment. Specific objectives included:
 To protect and maintain the marine ecosystem at the highest possible level, so marine life can flourish.
 To conserve, protect and enhance the greatest possible variety of marine life, ranging from the rare to the typical or representative.
 To establish a marine reserve of high recreational value.
 To form a link in a national network of marine reserves.
 To raise public awareness of our relationship to and responsibility for our coast and marine life.
 To establish suitable areas for scientific study.
 To establish marine reserve areas that represents the values of the inner harbour and outer harbour habitats.
 To raise the public's awareness and understanding of marine biodiversity conservation.
 To develop reserve areas which complement and area contiguous with land reserves already in place, thus creating a connected sequence of protection from land to marine habitats
 Protect a sequence of mangrove and mudflat habits and channel areas
 Protect a unique rocky reef habitat near the harbour entrance
On December 2nd 2004, the then Minister of Conservation, Chris Carter, approved two of the original three areas proposed by KHS. The consultation process led the Minister to remove Motumatakohe from the proposal, as its inclusion drew strong opposition from fishers and iwi. Two out of three is still a major national and international achievement! The Minister of Fisheries approved the reserve in 2005. In total, the two reserved areas comprise 254 hectares, or 2.54% of the total area of the Whangarei Harbour. The Department of Conservation formally opened the reserve on October 18th 2006. 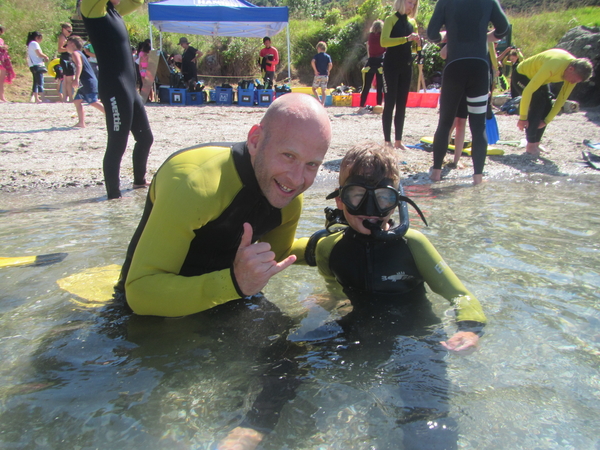 Samara Nicholas from the class of 1998, leads the development of the Experiencing Marine Reserves programme . “I became hooked on the concept of marine reserves since my year 13 year, when I realised I could make a difference”
I visited Goat Island Marine Reserve with my local School and was buddied up with two children. The look on the kids’ faces when they saw a huge snapper inspired me to capture that experience in an education programme. I had the idea of taking schools to see their local unprotected marine area, followed by a visit to a fully protected marine reserve for comparison, with a final action component to inform the wider community. The Experiencing Marine Reserves (EMR) programme concept was established in 2002, with the Mountains to Sea Conservation Trust established shortly after to provide a charitable umbrella. Since the marine reserves inception, the EMR programme has utilised and promoted the reserve to schools in the Northland district. EMR also developed the free Community Guided Snorkel Days, these events have now become part of the culture of the city and a regular feature on the events calendar for Whangarei Residents. Since 2006, EMR has guided snorkel experiences for 13,940 people at the Reotahi site of the Whangarei Harbour Marine  Reserve. The majority of snorkel experiences take place along the Reotahi shore line, where influence of current and tidal movement is much less. Triplefins, nudibranchs and large grey mullet are often observed. .  While on the southern side of Motukaroro Island, the reef plunges 30m to the deep-water channel of the Whangarei Harbour. The combination of deeper water and swift current flows has produced a diverse reef-fish assemblage. We have local schools that visit reserve every year and even schools from Auckland come to snorkel and learn about the only reserve to be proposed by a school.

The Waikaraka site of the Whangarei Harbour Marine Reserve, is a healthy mangrove environment with a rich supply of insects, shellfish, crustaceans and small fish, making it an ideal feeding ground for a large number of birds, such as shags, pied stilts, spoonbills, banded rail, kingfishers and herons. Fish like snapper, trevally, kahawai, kingfish and mackerel spend important parts of their lives among mangroves; thereby contributing to the replenishment of fish stocks in the harbour and adjacent coastal waters. Migratory freshwater fishes such as banded kokopu and eels move between the Waikaraka stream and mangroves.

Visitors to this mangrove marine reserve are welcome and activities like kayaking, picnicking, bird watching and intertidal exploration are encouraged. However, a number of activities are prohibited or restricted to protect the marine life of the area. The following are offences under the Marine Reserves Act:
 Fishing of any kind.
 The taking or disturbing of any marine life, including shellfish and seaweed.
 The taking of any part of the seafloor including rocks and shells, from the reserve, or erection of any structure.
 Feeding the fish. This disturbs their natural behaviour.

The Waikaraka marine reserve site is a great teaching tool and place to observe via kayak or paddle board. Mudflat environments can be very sensitive to human traffic intertidal exploration on the mudflat areas or where there are pneumatophores (mangrove breathing roots) are present is not recommended.

The EMR programme has also developed the  Community Kayak Days.

“It was a fantastic day, our 10 year old wants to come back to the next event. We loved seeing the shags and their nests – it was like something out of Dr Seuss” said participant Nikki Fleming

The Kamo High School geography project remains an excellent example of environmental education. The work in part fulfilled the requirements of the geography syllabus and provided a unique learning experience, while also allowing the students to make a difference! Each year new senior students would learn about the need, benefits, and appropriateness of a marine reserve in the Whangarei Harbour, and the students had the ambition that other schools could follow in their footsteps to establish further accessible marine reserves around the mainland coast.

To learn more about the boundaries head to the DOC website

For more information contact Samara Nicholas - email This email address is being protected from spambots. You need JavaScript enabled to view it.